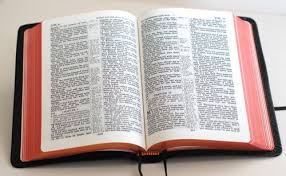 If it looks like a New Year’s Resolution and sounds like a New Year’s Resolution, does that make it a New Year’s Resolution?
I say no!
At some point during the month of December, I decided to do something I’ve never done before — read the entire Bible from beginning to end. In my lifetime, I’ve read bits and pieces of the Bible. I’ve searched for some meaningful way to study the Bible, but all I’ve ever managed to do is hop from scripture to scripture, reading a few chapters here and a few there and I usually end up reading the same passages over and over.
My goal is to read two chapters a day, beginning with Genesis and going straight through. This isn’t a New Year’s Resolution, it’s a Life Resolution.
Unfortunately, I haven’t quite made it to the “every day” part of my goal, but I’m doing much better than I was without any goal at all. And isn’t that the point of goal-making? Yes, it would be nice to hit the mark squarely, every single time, but we’re human. We aren’t going to be perfect. Ever. We aren’t supposed to be perfect. Not in this lifetime. If we were perfect, there would be no power in the choices we make to do good.
So we struggle, and we strive, and we set goals for ourselves, hoping that we’ll come close to reaching them — at least most of the time. Hoping that our efforts will elevate us in some way. Hoping that we’ll improve for our efforts. Because nobody stands still. We’re either moving forward or we’re slipping backward. All the time. To paraphrase the poster that that was so popular a few years ago, Perfection isn’t a destination, it’s the journey. The journey is the whole point. At least, that’s how I see it.
So I’m journeying through the Bible, two chapters at a time. I’ve set no specific time limit on myself. I’m not going to make this a chore. I want it to be an adventure. Today’s adventure: Genesis 21 and 22.