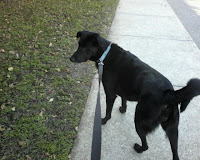 I took a walk with the dog today. My goal when I set out was to take a nice, calm stroll around the neighborhood to clear my head and get it firing on all cylinders. That’s been a problem lately. I spend more time trying to make my mind work than I do actually writing.
I’m frightened by that. I’m pretty sure it’s just stress (this last 4-6 weeks have been particularly stressful) but what if it isn’t just stress? What if there’s something wrong? Prayer doesn’t seem to be helping but it probably is. I’d probably be terrified if I knew how bad this was without divine intervention.
But anyway . . .
The walk. The dog and I walked our usual path through the immediate neighborhood, and then I thought, hey! why don’t we walk over that way a little? There’s a lovely bike trail along the side of the road, and it’s easy walking. There are also a couple of ponds with geese or ducks in them. Some sort of water fowl, anyway. I took the dog that way once before, and it was not a pleasant experience. She went nuts over the water fowl. I managed to keep control, but just barely, and I vowed never to repeat that experience.
So today, my plan was to walk down that way, but stop short of the ponds, and then turn around and walk back. The air was warm, but not too warm. A really nice breeze was blowing in off the Gulf, which made the walking really enjoyable. Until we got almost to the ponds.
Too close, it turns out.
Unbeknownst to me, the geese were sitting under a bush a little way from the pond. The dog spotted them first, wrapped the leash around my legs, knocked me off-balance, and took off after her prey. A couple of airmen from the nearby Air Force base were driving by as I fell. I’m sure it wasn’t a pretty sight. It sure didn’t feel pretty, I can tell you that.
Those nice men tried to come to my rescue. Tried to convince my dog — who was swimming laps around the pond and howling as if she was about to die — to come out of the water. But Angel (whose name is something of a joke, considering her personality) was having none of it. She swam and howled and howled and swam for so long, the airmen had to leave so they could get back to work.
Next came the women from the nearby convenience store, drawn to the scene by that very loud and prolonged Dog-in-Misery howling. One even tried going into the water–which was way too cold, by the way. She changed her mind, but she stuck around and tried to help. I owe her something. She was a real trooper!  I hope I can find her again.
By this time, the geese had realized that the dog posed very little threat, so they decided to torment her. Grinning as only geese can, they swam, got to the edge of the pond, flew across the road, and launched themselves into the other pond. 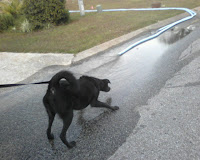 Aha! I thought. I can catch the dog when she tries to follow them. Which she did. Her eyes were wild. Frightened. I couldn’t tell if they were, “I’ve got to catch those geese” wild or “I’m about to drown!” wild. I got my answer when she dodged around me and threw herself into the second pond,
More swimming. More howling. A few more people stopping to watch.
I should explain here that my dog and I don’t go swimming in ponds on a regular basis, so I had no idea (a) how much she could endure, and (b) whether she would figure out she was at the end of her endurance before or after she sank like a stone to the bottom of the pond. There was also factor (c): lots and lots of traffic whipping past on the nearby highway, moving way too fast to stop for a crazed dog if the geese decided to fly in that direction.
I called both daughters — the one who lives with me so I could have another body present and maybe, maybe close off the dog’s options. The one who doesn’t live with me because the dog adores her, her husband, and her children, and I thought there was a slim chance one of them might prove to be more interesting than the geese, if only long enough to allow one of us to grab the leash.
After about the fifth switch from one pond to another, Daughter #1 managed to grab the leash and we got the howling, wild-eyed dog into the car. By that time, I was thoroughly angry with the dog. Furious. Every muscle in my body aches. My elbow is throbbing. My head hurts. My back hurts. My knees … bad to begin with … are pretty badly battered.
And then it hit me.
This wasn’t the dog’s fault, it was mine. Mine because water and geese are like crack cocaine to a black lab. I know that. I took the dog too close to temptation. I put her into a situation she couldn’t possibly resist. I had no right to be angry with her.
I swallowed some ibuprofen and we covered every bed, chair, and couch in the house with blankets to protect them from the dirty, wet dog, and I thought about temptation and how powerful it is in our lives. And how sometimes we end up in the pond, chasing the geese, howling with pain, and unable to stop swimming. And how sometimes, even when we have the best of intentions, we inadvertently take the people we love too close to the pond and the water fowl.
And then I sat down with my dog and apologized.