It’s my birthday today, so I’m in a reflective mood. It’s not a milestone birthday, and it doesn’t look to be a remarkable day in any way. I’ll spend most of the day alone, doing unremarkable things, like working and paying bills and running errands. I’ve already started getting good wishes for the day on my Facebook profiles, and those are always nice. Especially on a day when you’re alone, it’s nice to be reminded that you’re not alone.

And that started me thinking.

My life hasn’t always been an easy one. In fact, I often catch myself (especially on bad days) thinking something like All I want is for life to be good for a little while. I’d like to be able to say “It was a good life” just once before I die. Yeah. I know. Maudlin. Pathetic. A full-scale pity party. Like I said, that’s on bad days.

But even on good days, I have trouble thinking that I’ve got it good. I think the problem is money. When I think “good life” I think “easy life” and when I think “easy life” I think about having enough money to get by. To do stuff. To go places. I mean, I’ve lived in Florida for almost 7 years already, and other than a few business trips, I have yet to go anywhere in the state or do anything. I haven’t seen anything yet. There’s just never any disposable income.

But today, after I talked to the younger daughter for an hour as she commuted to work, I thought, other than money, what would I change to qualify this as a Good Life? And with that question on my mind, I started taking inventory.

My parents. Great people. I’m definitely one of the lucky ones. No, things haven’t always been perfect. Dad and I had a rocky go of things for several years, but we managed to work through it all before he died, and our relationship was pretty darned good at the end.

I wish I were closer to my mom now. I had to make a choice 7 years ago to be near Younger Daughter and the grandkids or near to the rest of my family. It wasn’t an easy choice, but being so far from my daughter and the grandkids was killing me. It still tears my heart into tiny pieces that I have to make that choice at all. In a perfect world, we’d all be in Utah together. But it’s not a perfect world, and I’m extremely lucky to have a family that I want to be around. Not everyone does.

Siblings: Great people. I have one older sister and one younger brother, which makes me the dreaded middle child. Again, not always perfect. Relationships not always seamless, but they’re good relationships and I love my sister and brother. That’s not something everyone can say — or at least not something everyone does say. And while we’re at it, let’s toss the World’s Best Brother-in-Law into this group because that’s where he fits. He’s been married to my sister for 40 years now, and though intellectually, I know he’s an in-law, in my heart he’s a sibling.

Nieces and Nephews: Biologically, I have two nieces and one nephew, but when you add in their spouses and their children, the pot grows much larger. I love my nieces and nephew with my whole heart. When they were little, if anything had happened to their parents, I would have taken them in in a heartbeat, and I’d have taken out anyone who tried to get in my way. Who cares that I didn’t have money. Pfffft! The best part is that when I “confessed” this to them once several years ago when we were all together, they told me they’d always known it. Best thing ever! I love their spouses. I love their kids.

Aunts, Uncles and Cousins: There are a lot of them, and they’re all terrific. I’m lucky enough to have an eclectic mix of relatives, and they delight me.

My Kids: I get to go through this life, with all its ups and downs, with my two best friends in the entire world. Seriously. I do not exaggerate. I could talk to either of them — or both — for hours every single day and we’d still never run out of things to talk about. When I have a joy to share, they’re my first call. When I have a heartache that needs easing, they’re there for me. We have laughed our way through some mighty unfunny things over the years. It’s our thing. And I have the greatest son-in-law ever. I mean, he actually seems to like me. He puts up with me and smiles a lot while he’s doing it, anyway. I love the guy. I really do. I couldn’t have picked a better husband for my daughter or father for my grandchildren. 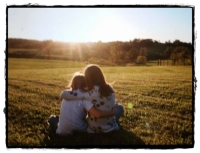 My Grandkids: Oh. My heart. My heart. Just thinking about them overwhelms me with love. If you know me at all, you already know how I feel about these two. I hope some day they understand even a fraction of how much love I feel for them.

A big, broad, world filled with a diverse group of friends. The last thing I ever wanted was to live in a narrow world confined by narrow beliefs and narrow viewpoints. It is vital to me to understand how other people think, what they believe, and how they feel — and not just because I’m a writer. Maybe I’m a writer because this is vital to me and I want to help the others understand. I don’t know.

Anyway, I’ve been lucky enough to amass a group of friends and acquaintances that literally spans the globe and is filled with interesting, diverse people from all walks of life, beliefs, and lifestyles. I wouldn’t change a thing, except maybe being able to get together more often.

I never wanted my kids to grow up narrow in mind or spirit or experience, either — and they haven’t.They embrace diversity and enjoy trying new things.  This makes me happier than I can tell you.

I’ve been given the chance to travel quite a bit. Oh, sure, I’d love to travel more. There are lots of places on my bucket list I haven’t seen yet. But for someone who has spent her whole life struggling to make ends meet, I’ve been a surprising number of places.

Even my regrets aren’t really regrets. Yes, I’ve made some choices that brought me a lot of pain and difficulty, but those choices I “should” (if you’re judging me) probably regret the most actually brought about some of the things that bring me the most joy in life — so what’s to regret?

Would I want to go back and experience it all again? Well…no. Of course not! I’m not crazy! 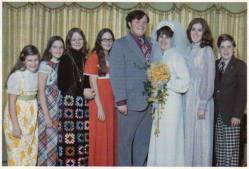 Even my divorce (or the marriage that went before it) can’t be classified as a regret. I met and married a man when we were both 19 (and way too young.) We ended up divorcing just five years later. I didn’t realize it at the time, but he was quite a remarkable human being–and I only realized that fully because of the choices he made and the actions he took while we were divorced.

Stand anywhere in the world and throw a nickle and I’ll bet you’d hit somebody’s stepfather. They’re everywhere. And you can find countless great ones who have taken in and raised their stepchildren as their own. But you don’t find so many who have taken in, accepted, embraced, and loved their ex-wife’s child with another man–a child who came about several years after the divorce. But that’s the man I married.

From the moment he met Younger Daughter, he gave her his heart and said frequently to anyone who would listen that he wished she was his. He attended every single event that child had until the day he died. Every performance. Every milestone. He was there — and he would have been there for much more if I’d let him be. Younger Daughter’s biological father’s rights were terminated by the court, but because of my ex-husband, she never grew up feeling as if she didn’t have a dad. That’s remarkable.

He and I worked through a lot of our old issues before he died, and I like to think that someday, somewhere, perhaps in a galaxy far, far away, the two of us will be able to sit down together and hash out the rest.

So what would I change in order to call this a Good Life? Really, just the one thing. A little more cash would be nice.