This week has kind of gotten away from me somehow. I’m not even sure how it happened. I haven’t had more than usual on the calendar, more errands to run, more responsibilities. Although, I did have some changes in the rules on Twitter and a few computer issues that kept me tied up for hours on Monday. As a result, I feel like I’m just starting my week.

My best-laid plans to get ahead of myself keep derailing. That seems to be the story of my life.

But all that aside, this week’s prompt for my personal blog challenge is My Favorite Quote. I’m a quote junkie, so you might expect that picking my favorite would be a bit tough, but actually this time it’s pretty easy. There are lots of quotes that would qualify as my top favorites, but only one that seems to sum it all up for me. 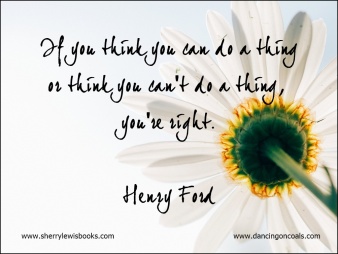 I don’t know about you, but I’m often my own worst enemy. I get inside my own head and defeat myself before I even get started. I tell myself I can’t and then, lo and behold, I prove myself right! I can’t write that. I can’t catch up. I’ll never be able to get it all done… Whatever the negative language, whatever the circumstance, I’m right.

All my life, I’ve wanted to learn how to paint. I’ve watched with envy when friends craft and paint and do other artistic things, but I’ve told myself repeatedly that I’m not artistic, so I can’t.

Recently, a friend decided to teach a class on art journaling at church and, because it’s something I’ve always wanted to do, the cost was low, and I was feeling really desperate to do something artistic, I decided to sign up. Maybe I can’t draw, I told myself, but I might be able to learn how to do something. I used to get an artistic boost from counted cross-stitch and crochet, but it’s getting harder and harder to see those tiny symbols on a counted cross-stitch pattern, and it’s too hot in Florida to have a big, heavy blanket on my lap while I crochet, so I’ve given up those hobbies for the most part. If I can ever leave Florida and move to a climate with actual autumn and winter, I might take that up again. 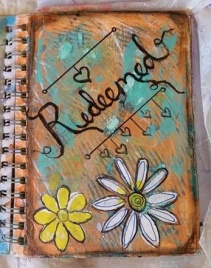 So I went to my first class and learned how to apply paint to the page to create a background. It wasn’t necessarily pretty, but it was colorful. I felt the urge to add a word to the page, but I didn’t want it to be ugly, so I looked at handwriting on Pinterest and found a tutorial on how to letter words artistically. I gave it a try…or twenty-two…and realized it wasn’t as difficult as I thought it would be.

Succeeding at that gave me the courage to try something else. I practiced making banners and text boxes. My first efforts were a dismal failure, and I almost gave up. I told myself I’d never figure it out, and I very nearly didn’t. And then one day I did!

I practiced doodling flowers (which required more concentration at first than I think technically qualifies as a doodle) and realized my efforts weren’t all that bad. I tried to turn my ugly stick figure people into something kind of cute, and realized it wasn’t all that hard to do.

One day, my younger daughter (the girl I’ve always considered to be way more artistic than I am) said, “Arting is hard.” and suddenly, I remembered how she used to spend hours practicing her cute handwriting. Realizing that even she had to practice gave me even more courage. 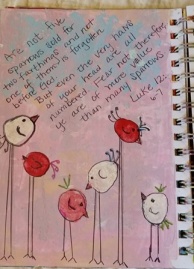 I’ve realized that my pages don’t have to be perfect to give me the artistic boost of satisfaction I’m looking for. I just keep practicing and trying new things. Next up? Water colors. I’m gearing up to take that step next. I watch YouTube tutorials and attend my class every week to learn new techniques for creating backgrounds and adding content. Some I like. Some I don’t. The ones I don’t, I figure out ways to adapt so I do like them. I’ve learned that if I make something hideous, I can cover it up and start over again. 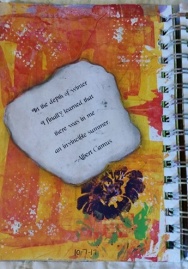 I get bolder all the time. I just keep trying, practicing, and taking rises. I’ve learned a little about charcoal and shading. I’ve tried new techniques. I’ve even started mixing colors on a page that don’t feel “safe.”  Orange and purple together? Who would have thought it? Who would have ever thought I could look at an orange page and think, “It needs a big purple flower!”?

It’s not as if I spend all day every day playing with my art journal (even though I want to.) I use my breaks from work to look through Pinterest for ideas and inspiration. I doodle…a lot. I channel my inner Bob Ross. 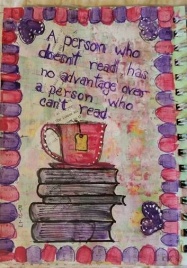 I sit at the table, concentrating like a small child drawing her first stick figure, and play with proportion and color families. I’m starting to get a feel for when I want to stay in a color family and when I want to go with contrast.

I learned how to draw things I never thought I’d learn how to draw. I took chances, something I never did before, even with myself. I was so convinced I couldn’t, that I didn’t. I didn’t even try because I was so afraid I’d fail.

I’m not the best artist in the world…yet. I’m not ready to teach somebody else how to draw and I’m not about to start posting videos on YouTube like I’m some kind of expert. That’s not my ultimate goal, anyway. My

ultimate goal is to have an artistic outlet that gives me a mood boost quicker than I can get one writing a novel. I want to create something artistic that feeds my soul and makes me happy. That’s the whole point. That’s the only point.

Now that I think I can, I realize that I’m right!