It occurred to me that some people might want to see the steps along the way–where I started when I was at my heaviest, where I got to, and where I am now.

This picture (which I love and hate at the same time) was taken at my daughter’s wedding.
June 2006.

With my daughter and her father, down 120 pounds and sporting some mighty fine stains
on my t-shirt (sigh).
June 2011

I can’t find a single picture taken of me in 2012. Hmmm…
The most recent picture I’ve been in, up a little from the photo above, but still down 110 pounds. I’m the first person on your left as you look at the picture.
October 2013 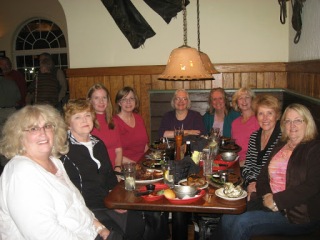 Still a work in progress. Still have a ways to go, but still on the journey and that’s what matters!